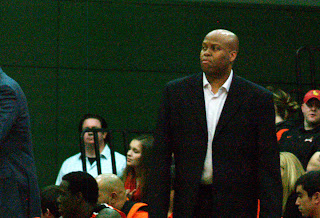 The "Whiteout" happened to a modest degree, but it didn't turn into a victory for Portland State Wednesday night at the Stott Center.
An inspired opening 10 minutes had earned the Vikings a 22-13 lead in a rare home game with a major college team, but the Beavers ramped up their defense and got some energy from a technical foul on their way to a 79-74 win in a non-conference men's basketball game.
Devon Collier scored 23 points, 'Burly' Joe Burton bruised the Vikings for 20 points and seven rebounds and coach Craig Robinson earned his 100th career victory at the school.
"We needed a true away game where we were going to be tested," Robinson said after his team improved to 6-2 on the season. "It's nice to win this game."
PSU got eight points early from Lateef McMullen on the way to a team-high 16, but the Viks had 19 turnovers and got outscored by 12 at the free-throw line before a crowd of 1,500 - a good chunk of which was wearing orange for the Beavers.
The Vikings dropped to 1-5 on the season.
Oregon State fell behind early, but ramped up its defensive presence around the 1-3-1 set once the deficit grew to nine. And, Robinson, sparked by a non-call, got a technical that seemed to inspire the team, especially when the Vikings' shooter Michael Harthun missed both free throws.
By the close of the half, the Beavers led 32-26 and built that lead to 14 before the Vikings produced a mild comeback.
Posted by oregonsports at 12:42 AM No comments:

Memo: Trust your offensive line, Riley. As my radio cohort Justin Herr said earlier, the running attack has been your bread and butter for YEARS, yet it seems you're getting away from that with your new "phenom" of a quarterback. Storm Woods is the truth; let him run.

That being said, Oregon State is in for no "pic-a-nic basket" this evening against the stout ASU defense. As long as OSU's offensive line shows up this evening and Cody Vaz is effective (see: 3 TDs, 0 INTs) the Beavs should party tonight in Corvallis.

Sun Devils quarterback Taylor Kelly will have plenty to say about that, though, so don't expect ASU to leave Corvallis quietly. A 169.8 passer rating and 19/5 TD/INT ratio makes the sophomore as solid of a quarterback as there is in the Pac-12 and a Jordan Poyer-less secondary could make plenty of trouble for the Beavs.

On to the predictions:

Posted by Unknown at 3:34 PM No comments:

Poyer game-time decision, not expected to play this evening


The Beavers defense may be without Bednarik and Thorpe candidate Jordan Poyer for this evening's game against the Sun Devils. The senior cornerback was injured in last week's loss to the Washington Huskies up in Seattle, and while Poyer remains a gametime decision, Riley and the rest of the Oregon State secondary has prepared to move on (at least this week) without Poyer.

If Poyer's leg isn't cleared pre-game the Beavers will rely heavily on junior Sean Martin, who has caused several pass interference and holding calls this season, and untested senior Ryan Hanford, who has had a special teams role most of his career.

If Arizona State's new sophomore phenom Taylor Kelly can replicate his performance from last week against a stout UCLA secondary (25/35, 315, 4 TDs).. A strong performance against a potentially dilapidated OSU secondary wouldn't be that far off of a bet to make.

Posted by Unknown at 3:20 PM No comments:


While the Oregon State defense is stout, no doubt, Arizona State has their own four-headed monster that the Beavers offensive line will have to worry about all game long. Junior defensive tackle Will Sutton (yes, he will play) is a beast all in his own and is near the tops in the Pac-12 in sacks, and with the other three.. well, OSU's O-line will have their hands full this evening.

Along with Sutton, juniors Chris Young, Junior Onyeali and sophomore Carl Bradford have combined for 45 TFL's and while the Sun Devils have lost two straight, this defense should be pretty peeved about coming to a place where they have lost four out of the last five visits.

This will be a big-time test for freshman Andrew Seumalo, who goes up against the best interior defensive lineman not named Star Lotuleilei. Sutton, who has been nursing a knee injury since ASU's loss to Oregon, should be back to 100%, meaning Seumalo and the rest of the interior offensive line will have a big task in double teaming Sutton and keeping him in check, lest the running attack have another lack luster evening like it did last week.

Posted by Unknown at 3:19 PM No comments:


It was Sean Mannion's job to lose and he did just that last week in the 20-17 loss to Washington. Two weeks after knee surgery the sophomore threw four interceptions and never allowed the Beavers to get into the game until he was benched in the second half for junior Cody Vaz, who put OSU in position to win the game until the Huskies ultimately kicked the game winning field goal late in the fourth quarter.

Whether or not Mannion's knee is completely healed remains to be seen, but Vaz has been given the nod as the Beavs host Arizona State this evening at Reser Stadium. Vaz currently holds a QB rating of 154.9 and has not thrown an interception in his 69 pass attempts this season (see: career).

With it also remaining to be seen what kind of role Markus Wheaton (concussion) will play in the offense, so look for WR Brandin Cooks and TE Connor Hamlett to have expanded roles this evening, along with a lot of RB Storm Woods to start out the game.

Posted by Unknown at 2:54 PM No comments:


Facing history, the Beavers take their passing offense (ranked 14th nationally) north to face a Husky pass defense that ranks 18th in the nation. If Oregon State can leave Seattle with a victory, a 7-0 record (first in school history) and a top five BCS ranking is within sight after a Florida loss earlier today.

With Sean Mannion missing the last two games after a knee procedure, the Beavers pass offense hasn't missed a beat in large part to the speedy duo of Markus Wheaton and Brandin Cooks. Wheaton, who leads the team with seven touchdowns (six rec, one rush), looks to extend his receptions streak to 30 games. Cooks leads the team in yards per receptions with 19 and is currently a top ten receiver in the nation with 111 yards per game.

Their counterparts this weekend, Desmond Trufant and Marcus Peters will be tested early and often as Mannion looks to shake of the rust of absence. Having given up 256 yards through the air in a loss to Arizona last week, the Husky corners will have a tough task at hand in attempting to shut down one of the more potent duo of wide receivers in the country.

The Beavers defensive line and linebacking core had to have been licking their chops this week, heading into a game where they face an offensive line that has given up three sacks a game and 21 on the season. While Huskies quarterback Keith Price is one of the more athletic signal callers in the conference, the duo of Dylan Wynn and Scott Crichton should have the junior quarterback on his toes for most of the game.

While history at the Clink has not treated Oregon State well (see: the 2-OT loss two years ago), this is not the Beavers of 2010. A tenacious defense should force Price (7 INT's the last four games) into a couple of mistakes, and if Mannion returns to form the offense will capitalize on said mistakes.

Posted by Unknown at 5:47 PM No comments:


Flashbacks of 2010 passed the minds of numerous Beavers fans and writers alike on Saturday afternoon. The Cougars defense, one that gave up 186 rushing yards to Pac-12 bottom-feeder Colorado a few weeks ago, was holding Oregon State to 26 yards on 16 rushes at halftime.

It wasn't the Cougars feisty defense, or the fact that Sean Mannion had already thrown two interceptions. WSU head coach had, after an abysmal performance by starting quarterback Connor Halliday, unleashed the Cougars secret weapon; the man that single-handedly walked all over the Oregon State defense en route to the 2010 shocker at Reser Stadium.

Senior quarterback Jeff Tuel who was listed on the injury report since Halliday took over against UNLV three weeks ago, had already come in and completed a 51-yard reception to Marquess Wilson, Washington State's biggest play of the afternoon thus far.

Tuel couldn't be made of Beaver kryptonite, could he?

With Storm Woods missing most of the first half with a shoulder stinger, the Beavers offense sputtered and failed to find the end zone, putting up a pair of field goals to hold a three point lead at the intermission. Sophomore running back Malcolm Agnew picked up a bit of the slack, going 47 yards on nine rushes in Woods' absence, but each Oregon State drive that reached the red zone resulted in a field goal.

Woods returned in the second half, but added only 53 yards to his first half total, amassing 55 for te game and 3.6 yards per carry. The true freshman felt the frustration after the game, having faced a Cougars defense that unexpectedly stymied them for the better part of the contest.

"Washington State (was) throwing a lot of blitzes at us. More than we could handle sometimes; sometimes we handled it, but they mixed it up between the 4-3 and the 3-4. I think I got confused a bit and that cost us two sacks," Woods said in the post-game presser.

Meanwhile, the Beavers defense did it's job in shutting down the Cougars attack. Tuel completed only nine passes in the second half, and the WSU rushing game was a non-factor as the combination of Carl Winston and Teondray Caldwell amassed 42 yards for the contest.

It wasn't the prettiest of wins (see: 11 penalties for 110 yards, Mannion's three interceptions, 4/6 in the red zone, take your pick), but Mannion said it perfectly after the game:

"You're never going to be perfect an entire season, as much as you would like to be. We are encountering some of that but ultimately it should help us grow. There's going to be games where we're not playing out greatest to open up the first quarter but it says a lot the way we bounced back. It would have been easy to fold but out team dug out heels in and played great football in the second half."

In front of a packed house and a record setting amount of fans, senior cornerback had a career game, intercepting Halliday twice and Tuel once to seal the Beaver victory, something the Astoria, Oregon native had never done in his career: a three interception game, and the first for Oregon State since Mitch Meeuwsen last decade.

"There's no moments like playing at Reser Stadium in front of a sold out crowd. My whole high school team was here watching me play. That was something I took into account when I went to sleep last night. These guys come out here and support me and my coaches. I want to do it for the, show them it's possible," Poyer commented after being asked about his performance.

Check back tomorrow for more post-game presser tidbits, analysis on the Beavers defensive front seven and what to look for next week as Oregon State prepares for BYU.

Posted by Unknown at 9:29 PM No comments: